Circle to ball, shape to form

For this exercise we had to draw three identical circles and shade each one with the light coming from a different angle transforming the flat circle into a ball with a cast shadow. 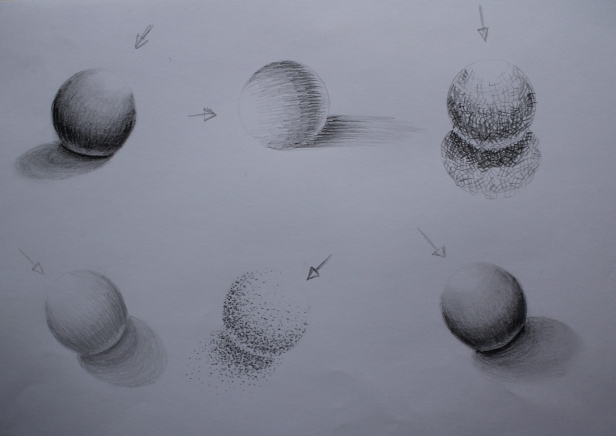 I found it quite difficult to make the reflected light look natural, but I’m not sure if that’s because I’m concentrating on that area too much.  I like the technique in the top middle circle as I tried to use little horizontal strokes to see if it would make a difference to the curve of the ball.

Having done a faint ‘scribbly’ effect in one of the Georges Seurat drawings (Tone and Georges Seurat) I wondered how that would translate to a ball drawing. I decided to draw in biro as I have a tendency to erase pencil if it’s not quite perfect and I didn’t want that option with a scribbly piece, I wanted it to look organic.

I like the movement of the pen marks, it looks structured but chaotic.  This would be a good technique for getting across emotion or anger.  I’d like to have a go at doing portraits in this style to see what kind of atmosphere it creates.

This exercise is all about observing the main areas of light and dark on two simple objects lit from one side.  Firstly, we had to make some sketches looking at gradation of light and and concentrating on shadows over the whole surface of the objects, including reflected light.

On the final piece I put down a mid-tone over both objects, then drew in faint shapes of shadows and reflections, concentrating on where two or more shadows overlap and where a reflection of light breaks up a shadow.  I don’t think I have ever observed two items as closely as I did with this.  The reflection of light in the shadow of the handle is not something I would previously have noticed, but it adds another depth to the drawing.

I also looked at the reflection between the two objects – the apple reflecting on the cup was interesting as it made one of the darker sides of the mug appear to have less depth as the reflection of the apple was darker and therefore draws the eye in to that area.

Although this image was mainly lit from quite low on the right hand side, due to skylights and a wall of windows there were a few light sources, but not as strong as the one from the right.  This created various paler shadows and added of a variety of tone and due to this my favourite section is the shadow of the apple coming towards us, having a flash of light at the base of the apple and then the darkest point of the picture to the bottom left of the apple.  The reflection of the handle looks a little awkward, but I was determined to draw what I could see, rather than what would be pleasing to the eye.

When I first started with the sketches of my chosen objects I was unsure about choosing the apple as I thought the texture and markings might detract from the tone, and although it did take a while to try and get it to a point that I was okay with, looking at the completed drawing now, I think it adds interest more than a second smooth surfaced object would have done.  I feel as though I’ve learnt a lot from this exercise, especially in my observational skills, but also in the way of working from a mid-tone and darkening areas or lifting off to create lighter areas.  I used kitchen paper and a tortillon to try and merge some of the areas of tone for a smoother, more natural look, and I think the unblended areas really stand out as a result of that eg the dark shadow on the left of the apple.

For the final piece we have to cover an A3 piece of paper in charcoal or graphite and work in reverse to produce an image by erasing some of the tone and adding it in where needed.

Firstly, I did some experimental pieces using charcoal.  I shaded a few squared areas in different dark tones to see which would be the easiest to work with, but soon found that the palest one of the three I’d drawn out was in fact dark enough and possibly even too dark.  I then attempted a further two, much paler ones.  I used different erasers to see which had the better effect, and for me it was a more maleable putty eraser from Hobbycraft, although a Koh-i-nor one was good at creating sharp lines, rather than lifting of a shaded area. 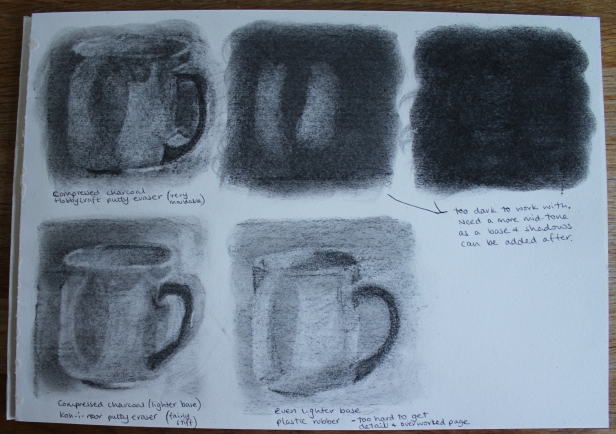 I then thought that graphite might be easier to work with as I’ve found it easier to ‘lift off’ in previous projects.  I went for a 5B pencil to create the mid-tone background and then began experimenting with different erasers again.  This time I found that the eraser lifted off too much of the background colour and I ended up re-working the areas to put some darker tones back in.  Charcoal seems to lift off in layers, so it’s easier to create various ranges of tone from lifting off rather than adding back in.

For the final piece, I chose charcoal and worked on an A3 piece of paper.  I worked over the whole sheet with a mid-tone and blended with kitchen paper to give an even look, although the texture in the paper showed through the marks in the charcoal.  Working on the cup first, I found it quite difficult to not draw in the shape, but tried to work the putty eraser into a shape to create the lines that I wanted.  It was really interesting looking at the shadows but working on the areas without shadows, it’s such a different method to what I’ve done before and really makes you study the objects in a different way, looking for light rather than shade to add in.  Some areas like the handle had to be reworked to make them darker so the lines here are much stronger than where the colour has been lifted off, but it gives a striking effect.

I found the shadows a bit of a struggle as they looked too dark and had to keep being reworked to lift off more of the charcoal to give a better contrast.  The apple in the final piece doesn’t have the same amount of texture as when working with pencil, it was difficult to create that without drawing too much back in.  I also found the edges of the apple are quite blurred compared to the cup, but again, without drawing the edges, it was tricky to give that effect.

I chose to leave the mid-tone charcoal in the background, and maybe should have left it more on the right hand side and towards the bottom right corner to make the objects stand out a bit more.  I would have liked the shadows to be more blurred, but I didn’t want them to get lost in the texture of the background.

Although the first mark-making was a bit daunting, without having an outlines sketched in, I enjoyed working in this way, and I think the final result is intriguing.  It makes you want to keep looking at it and find new areas of detail. Working on the A3 piece rather than the smaller sketchbook pieces was actually easier, although it clearly took a lot more work, it was easier to add in the smaller details and keep working to lift off to a proper white area to give more contrast and depth to the picture.